11 weeks ago, the kitten you see in this photo was malnourished, flea-infested, with a serious eye infection and likely a broken femur. At just 3 weeks old she was found, having been abandoned on the streets of Sacramento, California. When she was found, she probably had less than 24 hours to live.

Now, just a few short weeks later, she is a happy, healthy, well adjusted, rambunctious little cat, living in Ottawa with me and my husband, along with our other 2 cats and 70lb lab mix. She has travelled more miles in her short life than I have travelled in 10 years. How did this all happen?

I met Jennifer Johnston via Twitter in 2008. We became friends in text – our entire friendship, in fact, was built via 140 character snippets. About a year later, we finally met in person for the first time, however, it seemed as if we’d been spending time together forever. Eventually Jen moved to Ottawa and we were able to spend a lot more time together. Then, earlier this year, Jen moved to Sacramento to follow her passion – working for an animal rescue agency.

It was someone at Jen’s agency, Red Rover, that found the little 3 week old kitten. Jen fell instantly in love and decided to foster her. She cared for her and nursed her back to health, chronicling the adventures of “Cuddy” the kitten on her Facebook page. My husband and I watched with interest. This little girl was adorable, and funny, and her personality latched onto our hearts. I hoped and prayed that little Cuddy would find a good home. 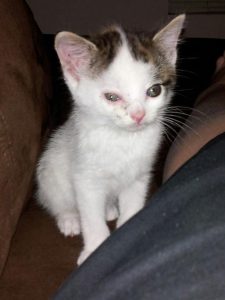 Cali “Cuddy” at about 5 weeks old.

Then one day, I learned that Jen was making a business trip back to Canada. She’d be heading to Halifax first, then to Toronto for a few days. And at that moment I knew. I looked at my husband and said “Jen is coming to Canada. Should we get her to bring the kitten?” He said, without hesitation, “Yep.” I messaged Jen and simply said, “Bring the cat.” And it was done.

Jen travelled thousands of kilometers to bring this kitten to our home. Now, as Cuddy (who we’ve renamed Cali, as an homage to her home state of California and her Calico colours) sleeps peacefully next to me, I am astounded not only at Jen’s generosity and passion, but at how the network enables us to do such incredible things.

My friend Amber Naslund was in San Francisco on business last week when she saw a Facebook post that a beautiful pit bull in Los Angeles was looking for a forever home. Something spoke to her when she saw the photo of this scared, timid pup – probably the same thing that spoke to me when I saw Cali/Cuddy for the first time. She needed to help this animal. She needed to give her a second chance.

You can read the whole story here, but essentially what happened was, Amber wanted to rescue this dog. She had no idea how she was going to first, complete the adoption (a myriad of tests and applications had to be completed in short order), and second, get this frightened pup from L.A. to her home in Chicago without any further trauma. Amber did the only thing she knew to do – she went to the network.

Within the span of about 48 hours, Amber had secured offers of both air and ground transport for the dog from amazingly generous people. While it looks now like she’s going to go by car (less traumatic for the dog), it presented another issue – ground transport won’t be available until next week. As the shelter could not keep her, this meant finding a foster for the dog, but not just anyone – someone with experience with timid dogs who understood what she needed to feel safe and secure. Someone trusted.

I watched as this story unfolded, and as Amber reached out to the network. It occurred to me that I knew the perfect person to help with this. I knew that my friend Jen in Sacramento had the resources to be able to help, and was geographically close enough to be able to help directly, and I knew that Amber needed a safe place with experienced people. The two women were only distantly connected, so I made a direct introduction. Now it looks as if Amber’s beautiful dog Hope will have a place to go until her ride arrives.

It’s unlikely these two stories could have unfolded as they did, if not for the power of the network. It’s likely that both of these helpless animals would have died, if not for the coming together of generous and caring hearts, connected by the electronic thread that ties us all together.

If you’re still skeptical that a bunch of bits and bytes and tubes and wires can truly change lives, you are sorely mistaken. The network is immensely powerful, and it can and does change lives every single day. If you still think that people cannot make real connections based on real emotions in 140 characters, think again.

5 Ideas to Get Your Creative Juices Flowing This Summer