If you’re Canadian, and you grew up in the 60s and 70s, chances are you’ve heard of Valdy. He’s one of the most well-known folk singers in Canada, and is famous for his hit song “Play Me a Rock ‘N Roll Song”. Here it is, have a listen. It’s okay, I’ll wait.

Notice what he says at the beginning of the video.

“This is a song about mass rejection…I was out of place, but I got a good song out of it.”

The song is a true story. Valdy is a folk singer, plain and simple. As he says in the song, he sings about “freedom and joy”. He really did go and play in front of 5000 rock ‘n roll fans. They really didn’t want to listen. They wanted rock ‘n roll…or nothing.

Every morning I spend a bit of time, as I sip my coffee, perusing news feeds, Twitter, and the like, to see what the day’s popular stories are. While there is some gold in them thar hills, more and more what I’m seeing is just the regurgitation of whatever happens to be popular and trendy at the moment. I see post after buzzword-filled post about how to be more human, how to be a social business, 10 steps to a better blog, and so on. Not that these aren’t good and valuable topics to cover. But to cover those the same way as every other blogger out there is akin to Valdy selling out to his audience and breaking into “Back in Black” in the middle of his set. It’s not real. It’s not true. It’s trying to be like everyone else, in the hopes that you’ll please people.

Your audience may want a rock ‘n roll song, but if peace and contentment is what you’re offering, then it might be time to do like Valdy, head back to the country, and find a new audience. The people who want to listen to your song are out there.

And you want to know a secret? You find them not by talking, but by listening.

We could all take a page from Valdy’s songbook, don’t you think? And oh, by the way, he’s one heck of a pool player too. In fact, he taught me everything I know about playing the game. But that’s another story. :) 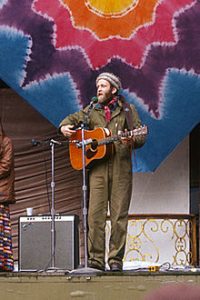 I Can Haz Podcast Episode 80: Amazing Things Will Happen

Back to Basics: Get Your Social Media Plan on Track for 2013