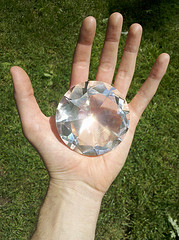 I can’t believe Google + has been around for nearly two months and I haven’t written a post on it yet!

Well, actually, I can believe it. I’m not one to get Shiny Object Syndrome. I do consider myself a Super Early Adopter, but I always jump into a new tool fully, explore, experiment and assess, before I start to shout from the rooftops about it. Call it cautious optimism.

Social media tools have given us a lot to contemplate these past few years. To me, it’s never really been about the tools – it’s been about the fundamental shift that’s taken place in the way we connect and communicate with one another. That’s the most fascinating part to me. On a daily basis, I’m connecting with people that, without these tools, I’d have never otherwise had the opportunity to cross paths with. Many of these people have become a very important part of my life. I’ve laughed and learned, and my life has been made richer for knowing them. The tools that have been around for a while, things like Twitter, Facebook, and blogging, have become ubiquitous to me. I don’t even consider the tools I’m using when I’m interacting online anymore. It’s second nature. I’m in the groove. I’m at one with social media now.

But I admit, Google + has taken some time to come to terms with.

At first, I thought it wondrous new place, with some familiar notes – a Facebookesque layout, and a quick setup. I just logged right in, and because of my already beefy Google Profile, the tool knew who I was and anticipated who I might want to talk to. In all of 5 minutes I was reading, sharing and conversing. But then I took pause. Do I really need ANOTHER social network to keep up with? Maybe it’s not for me. There’s a lot of people on here I don’t know. Who is that guy and why is he circling me? Self doubt crept in, and I walked away for a while.

My initial excitement at the shiny new tool wore off quickly this time. I didn’t go back for a couple of weeks. But my curiosity got the best of me again. I poked my head in, looked around. And what I saw was surprising.

It wasn’t just the same old people having the same old 140 character conversations. Sure, there were the usual suspects – but there were so many new faces! The long form conversation of Google + achieves something that 140 characters never can – it allows me to get a really good sense of what someone is about, fast. The in-line conversation of comments and sharing is easy to follow and often is more interesting than not. As much as Twitter is like a pub – small snippets of conversation weaving in and out in a noisy room – Google + is more like an intimate dinner party, where we’re still sitting around the table, talking for hours after the plates are cleared.

Yes, it’s true. I’m finding my groove with Google +. It’s the first place I go now, with Twitter running a close second, and Facebook being something I breeze by out of a false sense of obligation and habit more than anything.

I can’t predict the future, and like you, I don’t know if Google + will still be around in 6 months or even 3 months. But I have a sneaking suspicion it’s not going away any time soon. And while it’s here, I’m going to get as much out of it as I can.

Oh and by the way, Twitter. I still love you too, and I always will. It’s just that our relationship is changing. It’s not you. It’s me.

(I still have plenty of invites, so if you’re not in Google + yet and want to try it out, send me an email at murphy.sue[at]gmail.com and I’ll hook you up.)

Flipping the Classroom: Weighing the Risks

Some Ideas for Teachers on Using Tech in the Classroom