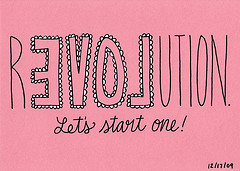 Changing the world is hard work. That’s why most people don’t bother to try.

We all have our share of complaints about the state of our world. Just check the Twitter stream for #cdnpoli or #elxn41 over the past few weeks, as Canadians get ready to head to the polls for the 4th time in 7 years. You’ll hear all kinds of people who want their world to be different. They are extremely vocal about how this politician is a thief and a liar and that politician is a jerk. Yet, what will likely happen on May 2nd, is we’ll end up in exactly the same position we were before – same minority government in power, same people calling the shots.

Everyone wants to change the world, but very few are actually trying to actually do it.

In case you haven’t heard, everyone’s favourite celebrity chef has been making progress with a problem that many people have been wanting to solve for years – childhood obesity and rampant health issues in school-age kids. He’s doing it by getting to the root of the problem – changing what is being fed to kids at school and in their homes. He got the government in the U.K. to pay attention the issue, and now he is taking on the U.S., where the obesity epidemic is at an all-time high. I won’t get into all the details here, you can follow the show “Food Revolution” and watch the story unfold.

What I really want to talk about is what we can all learn from people like Jamie Oliver about creating a revolution that can change the world.

You have to get really pissed off.

I don’t have kids of my own, but I have lots of kids in my life. So, while I don’t have the responsibility of keeping a small human being alive and healthy, I do have enough sense to know that if you continually put garbage in your kids they are going to get sick. Unfortunately, there are a lot of parents who have not really caught onto that. There are a lot of school administrators who are more concerned about the bottom line than rising rates of diabetes and high blood pressure in 12 year olds.

The state of things around food in schools is completely unacceptable to Jamie Oliver. He is pissed. But there’s a big difference between this guy and the average person. While many people would just stand idly by and throw up their hands and say, “what can I do?”, his anger prompted him to actually DO something.

And then you have to figure out what you’re going to do about it. You can’t change the world without getting super pissed off. Because when you’re angry, you’re angry because you want a situation to be different than it is. And the only way to stop being angry is to make that situation different. And the only way to do that, is to stand up and actually do something about it.

You can’t take no for an answer.

OK, so you’re pissed. Great! You start running around banging on doors, telling people that you’re upset with the status quo and how you want to change things. You provide seemingly simple solutions to the problem. It’s a no brainer, right? Until the door slams in your face. Repeatedly.

You think Jamie Oliver would have been able to convince the U.K. government to pledge to change the way things were done in schools if he’d taken no for an answer? If he’d just walked away the first time someone with “power” said no, then he’d be still sitting around being pissed off, and nothing would have been accomplished.

If there’s anything I’ve learned from owning my own business the past 7 years, it’s that lots and lots of people are going to say no to you, and the more you want something, the more people are going to say no. But every time someone says no to you, it’s a tremendous opportunity. Every time a door slams in your face, you simply need to go find another door. Eventually, one of them will open for you, and stay that way. And every door that slams shut buys you more time to refine your solution. It gives you something else to look at, and helps you to see things from a perspective you may have not considered before.

Nobody has ever changed the world in the first go. The word “no” is your chance to revise, adapt, and come back stronger.

You have to build an army.

Nobody changes the world by themselves. Sure, often the spark of an idea starts with one person, but it takes armies of people to make real change. You need to grab people’s attention and get them as pissed off as you are. Often, you can’t just tell them about it. You need to show them.

Last night, Jamie Oliver, on the Season 2 premiere of his show, Food Revolution, showed people the garbage that the school system is feeding their kids. He mixed the equivalent of dog food (by-products from beef) with ammonia, and explained that this is what is used in many processed burgers – including the ones being fed to kids in schools. He then overflowed an entire school bus with 57 tonnes of sugar to show how much sugar kids are getting in their flavoured milk in just one week in Los Angeles.

Is it dramatic? Well, of course it is, that’s the point. The only way to build an army of people is to get them pissed off too. Because, what’s better than one person angry enough to change the world? Thousands of angry people.

The way to create a revolution is to build an army, and the way to build an army is to show people why you’re upset. And no, you don’t have to be a world famous celebrity to do build an army. You don’t need millions of Twitter followers or a prime time network TV show. Those are just tools, leverage points. You have your own leverage points, so figure out what they are, and figure out how you’re going to show people what’s going on and how it needs to change. If you’re angry enough, you’ll do it. (Hint: The Internet makes army building much easier for everyone, including us non-celebrities!)

Then, once you’ve got your army, give them something to do. They will be there, ready and willing to help, and you need to have a strategy in place. So, before you start dumping sugar in buses (ok, that’s been done), spend some time mapping out a plan. You want to take advantage of the passion you’re going to spark in people and give them something to take action on right away.

Building armies takes time (only 20 people showed up to the sugar dump on Jamie’s show). But persistence and a plan will help you get there faster.

Anger. Persistence. Armies. That’s what it takes to change the world.

So, when does your revolution start?